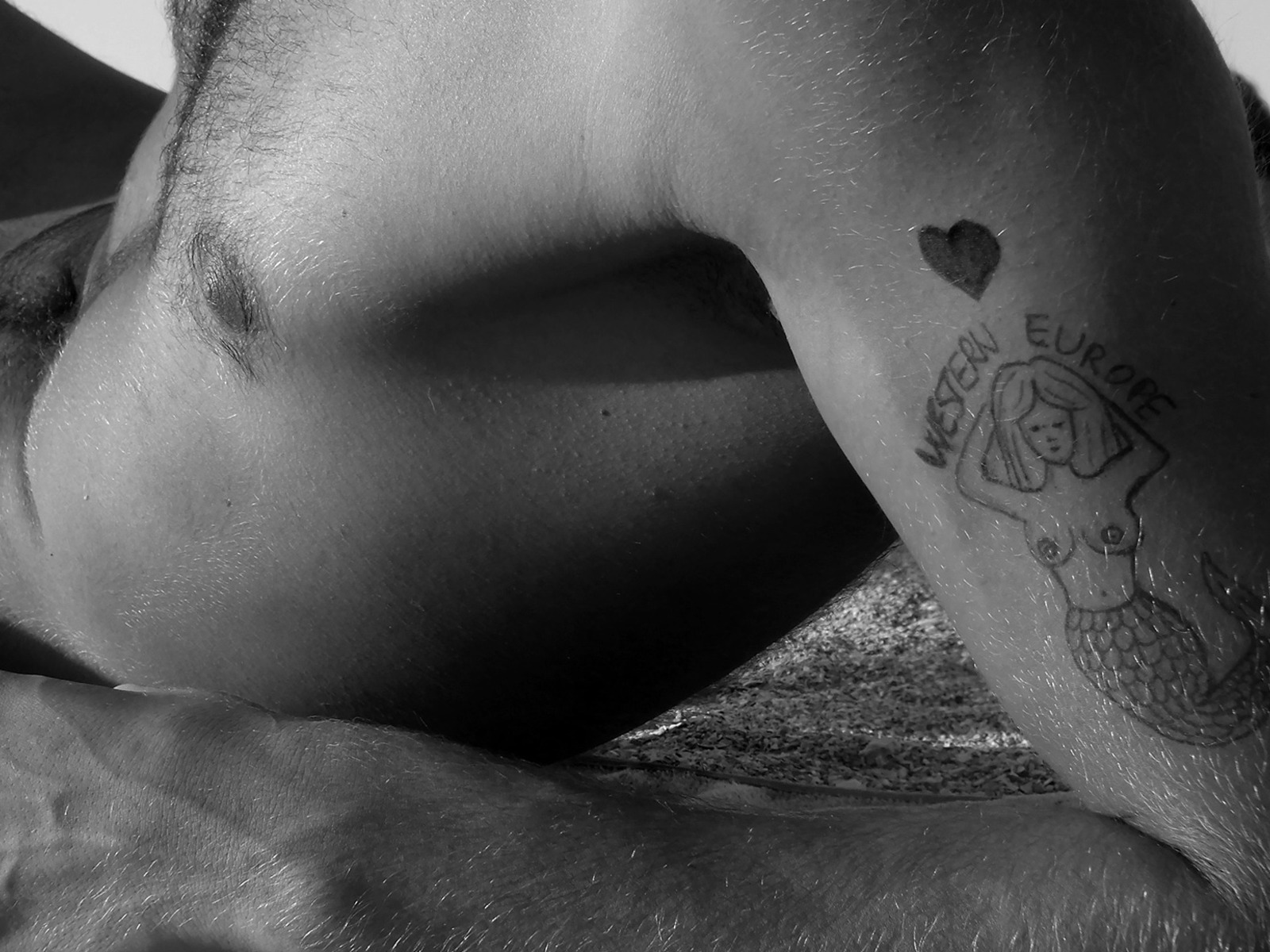 Silvia Amancei & Bogdan Armanu’s exhibition “s.a.b.a. 1979–####” at Škuc Gallery in Ljubljana discusses contemporary politics in a realm opaque to our reality, which is emphasised by blending techniques of collage, drawing, and montage in all the media they use. In their visual narratives, they criticise Europe’s pursuit of cheap labour, the idealisation of a Western art canon, as well as the future seen as an economic calculus.

From 6 August until 11 September, Škuc Gallery presents s.a.b.a. 1979–####, a retrospective by the Romanian artist duo Silvia Amancei & Bogdan Armanu. The exhibition comprises video works, drawings, and an archive of performance works, exploring their unique reflections on the political status quo and on its critique from the cultural field. In their works, they long for political change, to an idealised communism also featuring references to the latest theories shaping that discourse. Cynical about the cultural sphere embracing these ideas, s.a.b.a.’s art practice contains biographical and historical elements showing how the specific situation in the East of Romania structurally excludes some, despite calling for equality. In their narratives, Romania plays the role of Europe’s source of cheap labour and s.a.b.a. themselves struggle with the lack of access to the art world. Silvia Amancei & Bogdan Armanu discuss politics in a realm opaque to our reality, which is emphasised by blending techniques of collage, drawing, and montage in all the media they use. By leaving the end undefined, the retrospective reflects s.a.b.a.’s work of the last years and highlights their uncertainty regarding how current politics will shape the future, or even make it impossible.

a curatorial text by Maximilian Lehner

A retrospective. In the context of an exhibition, it is quite clear what is meant: literally ‘looking back’ on a well-established artist’s oeuvre. The time is defined by art professionals, institutions, and the art market, thus being influenced by taste, politics, geographies, personal relations, economic possibilities, and access to the means of reaching these options. In their art practice, s.a.b.a. consciously relate their own situation to the success factors of the contemporary world: Romania plays the role of Europe’s source of cheap labour, s.a.b.a. struggle with the lack of access to the institutionalised art world. Political, historical and biographical elements like these are constantly part of s.a.b.a.’s narrations. Through a fictional account, they connect histories not obviously related and discuss politics in a realm opaque to our reality.

Body of Work ’79−’83 (2013–2015), in which s.a.b.a. archive photographs and stories of their beginnings with performances from 1979 onwards, is such an ironic take on the increasing interest from art institutions within the Eastern European art practices. Imitating the aesthetics fetishised from the art world’s perspective, s.a.b.a. fictionally join a canon of famous artists. With small hints, they mock the desire of being recognised in the ‘West’—a commonplace equivalent to the invisible regime that decides on art trends and who gets a retrospective. Departing from this archive, s.a.b.a.’s practice is translated to this retrospective of their past and future work in complete ignorance of the power of institutional recognition; inverting the market strategies of (re-)creation of events[1] into a preemptive gesture that urges to withdraw its meaning from itself.

Another way of framing the ‘looking back’ is by describing complex relations of historical traces, political decisions, or personal feelings that shape a certain event and its perception in historical time. In the often-cited passage on Paul Klee’s Angelus Novus (1920), Walter Benjamin speaks of the ‘pile of debris’, a result of the past catastrophe, the angel of history cannot turn away from, while a storm called progress blows them into a future.[2] In s.a.b.a.’s series of drawings Angelus Novus (2016), the angel’s direction in time is not so clear. The angel’s look, embodied somewhere between an all-seeing eye and a U.F.O., renders economic optimisations the current catastrophe—and gets absorbed by them, leaving no place for change. The impossible ‘after’ reinforces a depression caused by the lack of sense in human actions, where effects and ‘revenues’ are subjected to another speculation.[3] Rooted in economic calculus it seems even rational that there is nothing but the calculation of the future: an oracle applied to the uncertainty of individuals exposed to its effects.

While prophets, poets, and their technological equivalents infer from the present, the three Poems (2016) intensify the depression. The techno loops give a soundtrack to the all-time—even spare time—impossibility of escaping the structures of work. The two artists look at a world in which capitalism reigns. They try to cope with everything already fucked up, go into micro-analyses of past and future, how single decisions driven by the urge for more (money, power, privilege, champagne) lead to suffering. Whereas earlier works deal with that theoretically, (How to) Migrate Towards a Future? (2019) starts with a personal journey from Romania to ‘Europe’ situating their lives in the effects of economic calculations. s.a.b.a. grew up in a country shaped by their aftermath, their lives blend into the exploitation of cheap workers and politics supporting this system. Untangling single threads in the video objects to the historical chronology[5] fulfilling itself, from the oracle to its future.

The mini-series Unlovable Prospects (2020) twists the chronology once more, relating all layers of time to each other, revealing them as a mix of TV footage, movies, other artists’ works blurred with layers of cut-outs and starring themselves—thereby arranging dark futures which refuse to be prophecies or scenarios:

[1] Cf. Cristina Baldacci: Reenactment: Errant Images in Contemporary Art, in: C. Holzhey and A. Wedemeyer (eds.) RE-: An Errant Glossary, Berlin: ICI 2019, pp. 25−34. Baldacci’s account refers to layers of counter-narratives of history, reenactments of the non-accessible as well as their capitalization. This text can only hint to the ways in which s.a.b.a. try to refrain from all these strategies and invert them once more.

[3] They only lack the positive ‘as-if” for the effects of actions that might lead out of depression despite uncertainty. Cf. Franco Berardi: After the Future, Oakland/Edinburgh: AK Press 2011, pp. 64−68 and 162−164.

[5] For this idea of relating chronological time and history, and the critique that historical connections do not necessarily depend on or follow chronological order, cf. Siegfried Kracauer: Time and History, in: idem, Geschichte—Vor den letzten Dingen (Werke, Vol. 4), Frankfurt: Suhrkamp, pp. 377−393, here: 378−379.

All exhibition images used in this article belong to Škuc Gallery and photographer Klemen Ilovar.

Any cookies that may not be particularly necessary for the website to function and is used specifically to collect user personal data via analytics, ads, other embedded contents are termed as non-necessary cookies. It is mandatory to procure user consent prior to running these cookies on your website.